The temperatures were warmer than week (how couldn't they be?) and the rain just barely held off until the end of the A race, making for a dry morning of racing despite the forecast. 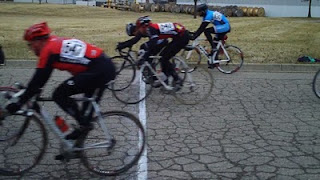 The C race saw a number of riders try to get away, but nothing stuck. Aaron McCready opened a gap on the last lap, though, to take the win. Hana Berkooz took the two-up sprint for the win after riding a quick tempo with Grace Singleton in the women's race. No break stuck this week in the B race, but that didn't keep Joe Lekovish from staying near the front again this week and getting the win in the sprint.
A handful of Canadian riders joined the mix for the A race, and with a blistering pace in the first half of the race some riders in the peloton were asking if there was an international conflict they hadn't heard about. Despite no truth to those rumors the attacks persisted throughout the race. With the speed in the field remaining high, nothing could stay away and it came down to a field sprint with Robert Foshag taking the win.
Check out the full results and points standings on the results page, or watch the finish camera videos for the C race, B race, or A race.